FotoARRAY  (but not in the "Free Edition")  includes a function that automatically evaluates image files passed to the program. This is called scripting. The function can be activated by calling fotoARRAY from a command line or from another program, or by dragging and dropping it onto a special field in the main window.  For Windows, a program called "Start_fotoARRAY" is supplied which can also start the script. It can optionally start another process to process the image files which were passed to it as command line parameters.

Basically, the scripts are always about adjusting the images stored in fotoARRAY by passing data from the outside. Mostly it is used to renew the preview displayed in fotoARRAY so that the image is displayed as it looks after editing in an external program.

Since pictures in the current data base are to be changed, fotoARRAY must find first the picture which was the source of the data sent to it. For this the file name of the picture can be check whereby additionally however still the exposure date is compared. For a unique assignment, the file name can also contain the database number (GUID). This number can be added automatically during image export (F6) and is then included in the file-name, i.e. DSC_123_{[AB....]}.xyz.

In any case, the function is controlled via the properties dialog.

The properties dialog distinguishes between different modes of operation.

(A) Images are transferred by drag and drop.

(B) Operation is activated by calling it from the command line, "script mode". Here it is still possible over a command line parameter, e.g. -preview, between different modes to switch. Thus depending upon parameter another function can be started in fotoARRAY.

The mode "-importshared" is used to process JPEG and DNG files uploaded from mobile devices through fotoARRAY Broadcast.

The mode "Default" is executed when fotoARRAY is launched by a different application, i.e. by CaptureOne to postprocesse developed images. 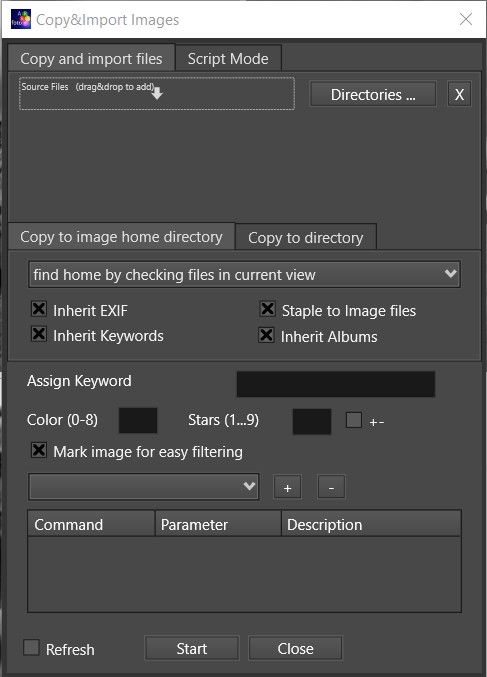 Besides modifying already imported images, the script can also be used to add individual photos to the image catalog. This kind of import is slower than the directory import. It makes sense, however, if additional versions of an image are to be created.

The import, conversion, renaming of the data is controlled by the script. You can create this script by selecting a command in the selection box and entering it in the list with +. The following commands are available.

The "base" of the commands is the source image found in the catalog. This is the images which is going to be updated.

Any Questions? Please visit our forum.